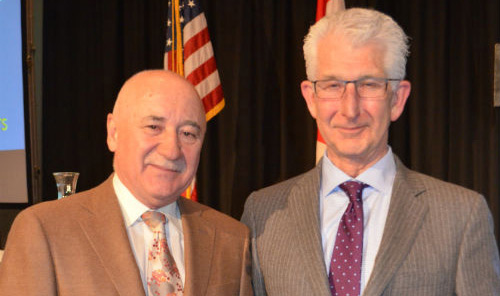 “Hal has channeled his passion for Grand Forks into an investment of time and talent that has impacted many facts important to building a community that attracts business growth,” said EDC Board Chair Dwight Thompson. “He has been unwavering in his support of economic development efforts.”

The EDC Impact Award is given at the discretion of the board of directors to recognize outstanding businesses and individuals making a positive impact on economic growth and prosperity in the Grand Forks region, said Thompson.

“I accept this award gratefully and will consider it as an impetus to continue participating in the exciting future of our city,” Gershman said. “I am very optimistic about the future of Grand Forks and would like to thank everyone for giving me the opportunitiy over the years to participate in the well-being and growth of one of Amercia’s great small cities.”

The inaugural award was given to Dave Britton in 2014, followed last year with awards to Phil Gisi, CEO of Edgewood Management Group and Cirrus Aircraft.