Baumbach Awarded Economic Developer of the Year, EDC Awarded Project of the Year

Baumbach has been with the EDC since 2016 and has been the lead developer on more than 50 business retention/expansion projects including Mobile Recon Systems (a heavy-lift drone manufacturer that relocated to Grand Forks from Kentucky), Core Scientific (a Washington-based data processing company that expanded to Grand Forks), and supporting multiple expansions of Northern Tier Seed in Grand Forks County.

Under his leadership, the EDC helped the City of Grand Forks and the Jobs Development Authority launch StartUp GF and Accelerate Grand Forks. The programs are positioned to support new, innovative ventures, growing the future of Grand Forks.

“I am honored and humbled to be recognized by the EDND for this award,” said Baumbach. “Recognition for work worth doing on behalf of the Grand Forks community is immensely gratifying.”

“Brandon has done an incredible job in his role as lead business developer for the EDC,” said Keith Lund, President & CEO of the Grand Forks Region EDC. “He’s worked on many successful projects and has earned the respect of businesses and community leaders alike. I’m very pleased Brandon has received this award and is being recognized at the state level for his accomplishments and impact on the region.” 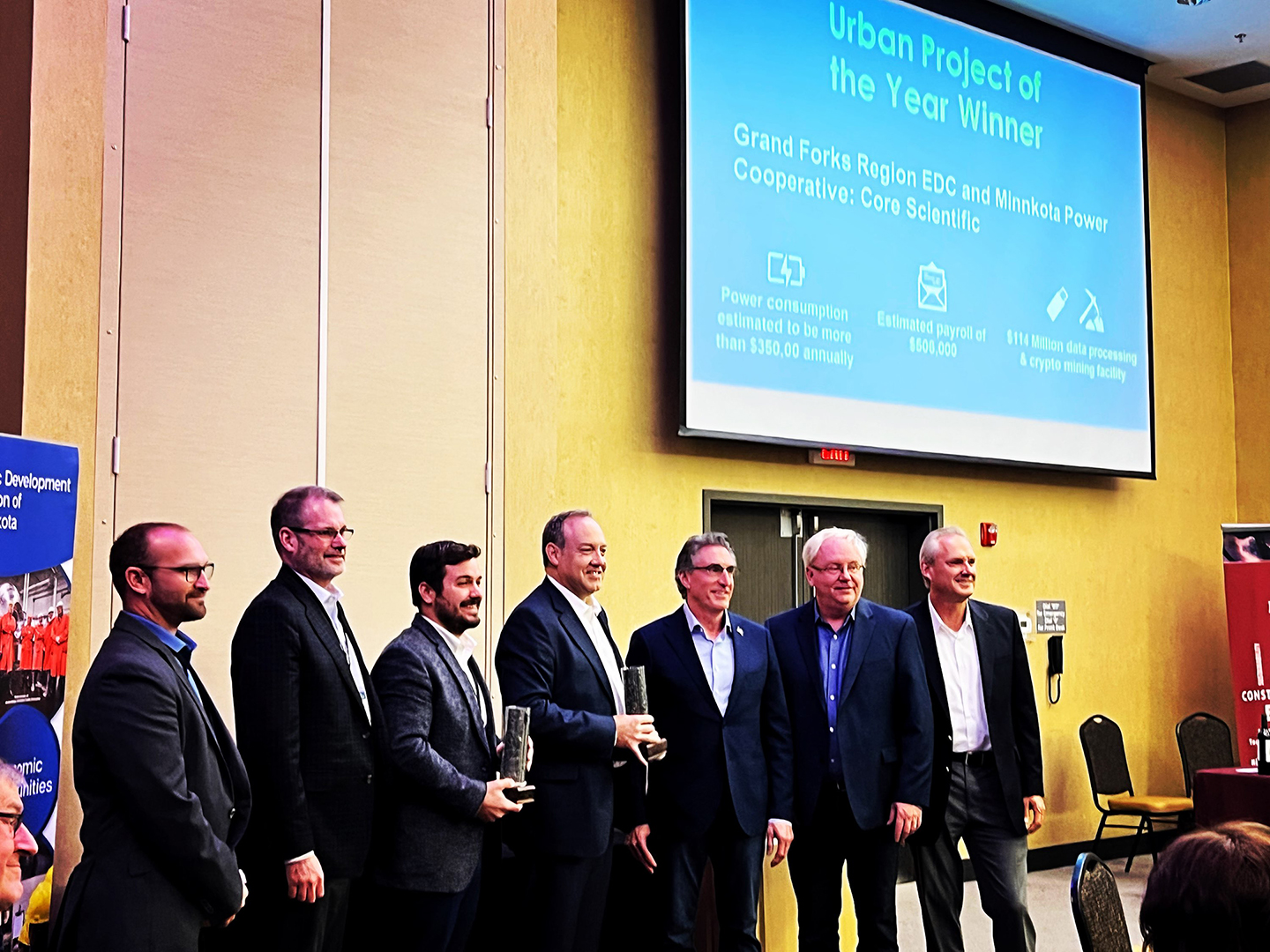 The EDC also was awarded the EDND Project of the Year in the large community division for their work with Core Scientific. The company, which is developing a data center in Grand Forks, offers infrastructure and software solutions for artificial intelligence and blockchain users – the foundational technology of cryptocurrency mining. The EDC team coordinated overall business support for the project including site visits and programs applied. Responsive and aggressive leadership (both local and state) played a key role in project success. Core Scientific identified Grand Forks as a prospect, called, and had a meeting with the mayor of Grand Forks, Bank of North Dakota, and a development team from Minnkota Power Cooperative, Nodak Electric, and the EDC all within a week. The entire $114 million project was negotiated and developed over the next four months—all possible due to key leadership.

“It’s been a pleasure for the EDC to work with the Core Scientific team in the development of this significant project,” said Lund. “We are pleased that EDND recognized the hard work behind the scenes that our local, regional, and state partners performed to help develop this state-of-the-art data center in Grand Forks. We are proud of our collective work and excited to welcome Core Scientific to Grand Forks.”

The company will significantly increase the technology industry in Grand Forks, a strategic growth sector for the EDC. Core Scientific is leading the data processing industry and sees a great opportunity with UND and their computer science department. They not only mine cryptocurrency and process data on-site, but they also uniquely repair bitmain miners which are in very high demand.

Furthermore, the power consumption of this project will be very large and is estimated to generate more than $350,000 annually to the city in franchise fees alone. Just to put their anticipated power usage in perspective, this company’s power load is expected to be five times larger than any other single user in Grand Forks.